[A note on post timing: This diary is, of course, mildly fraudulent. Though I’m writing these entries to sound contemporaneous with the events they describe, they are actually written several days after the fact. I’d hoped to be able to write about the first five days on my day off Friday, but Days 0 and 1 were all I was able to complete. (More about that when I get to Day 6.) I’m finishing up everything after Day 1 here at home—after several naps. Unfortunately, by now all the days and events are pretty well mushed together in my memory, so I’m forced into less detailed, more general discussions of events.]

Looks to be a relatively straightforward day, if long. Yesterday was larger than we like for the first day; we’d prefer a smaller day while we all remember our routines and get used to any oddities in this particular setup. But everything went fairly smoothly, if slowly.

The slowness is worrisome. The schedule depends on each round of the morning events finishing relatively on time in order for the later events to start. If a pool or DE round is slow, then the delay will cascade through the whole day. No matter how well-organized we are, we can’t start a new event until there are vacant strips to put them on.

Remarkably enough, we haven’t had many complaints about delays starting DEs. Often, when we get complaints about long delays between pools and DEs, it’s from fencers in pools of 6 who haven’t realized that we’re still waiting for the last few pools to come in. Most referees who finish early are really good about going back out to see if they can help with the slower pools, but until that last pool is done, we can’t start the DEs.

Today seems to be the personality shake-down day. I think it’s partly because we’re all so concerned about Tuesday and Wednesday, which are by far our largest days this year. If the first two days are running one to two hours later than expected, what’s going to happen when we get to the days not even projected to end before 10:00 or 10:30? Those 53 ME teams that don’t start fencing until 4:00 pm on Wednesday are looking scarier and scarier.

I think that’s the main reason we’re all so testy today. Everybody’s got their own way of organizing their paper to keep track of it, and instead of accepting that as normal, we’re all seeing everybody else’s way as wrong because it’s different from our own. Or we’re getting annoyed at the person who jiggles his leg or the other one who hums as she slices and sorts bout slips. I hope we’re just getting it all out of our systems before the really hard days start.

This is one of the best BC staffs I’ve ever worked with. The table side is essentially interchangeable–I’d trust any of them on any event, and every one of them will jump in to help out with a problem or pick up an extra event without being asked if someone else’s runs late. The computer side is equally strong.

Most people don’t realize how crucial temperament is for national bout committee staff. We need people who understand the software and the tournament formats, of course, but we also need people who work well with each other, who can negotiate the fine line between letting the others do their jobs and jumping in to help when necessary. We need people who, when they make a mistake (and we know we will occasionally make mistakes, no matter how much we try to avoid them) do what is necessary to correct it without letting it throw them.

By late afternoon, most of the crabbiness seems to have worked itself out, so I’m a bit more hopeful about tomorrow. We still have to worry about the midnight rule (we aren’t allowed to start a bout or team match after midnight), but it feels like we’re all settling into our routines now, getting a bit more tolerant of each other’s quirks.

If only the Under-19 Women’s Foil could move a little faster. They didn’t close registration until 3:00, so they’re the ones we’ll be waiting for tonight. It happens in every weapon, but it always seems more pronounced in women’s foil—no matter how well the DEs move along, at the round of 8, everything seems to slow to a crawl. Suddenly, every fencer wants her full ten minutes between DEs, bouts are closer, and each and every one seems to go to time. Every event feels like it has to be almost done when there are only 8 competitors left, but in the point weapons, there’s usually at least another hour and a half before the end.

This is the time when I like to make the strip plan for the next day. It’s relatively quiet, at least as quiet as fencing venues can be while fencing is still going on, and there are few interruptions from spectators and coaches. I can sit and look at the schedule and see how many strips the 8:00 events will need for their pools. Lots of people have been teasing me about my iPad, which I’ve been trying out for strip management instead of the traditional paper-and-pencil on a clipboard. I’m using a spreadsheet to reproduce the simple chart we use—rows for strips and columns for rounds—but the big advantage with the iPad is being able to give each event a unique color. Instead of squinting over penciled-in columns to see where I’ve assigned any given event, I just have to look for the right color, which jumps right out at me. It almost—but not quite—makes up for the bizarre strip layout we have. 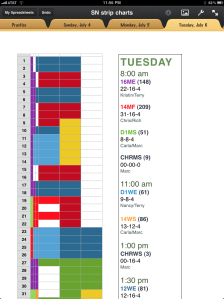 Tuesday strip plan on my iPad

Sometime tomorrow afternoon, the strips to replace the bananas are supposed to be here, plus we should be able to have the roll-out on strip 58 moved so it’s not on top of the power access cover. We’ve heard that the rumors are that strip 58 shouldn’t be used because it could electrocute the fencers, but it’s purely a matter of uneven footing that could cause fencers to trip.

I’m still happy we’ve been able to put the gold medal bouts for the wheelchair events in the finals area. It’s about time—they’ve been stuck off in their own area for far too long.

Nine colors on the strip chart for tomorrow. The morning lays out easily, but I can only plan the first few rounds—how the later events go will depend on how well the morning rounds conform to projections. I just hope we’ll be able to get the medal bouts for the last events started before we all turn into pumpkins.