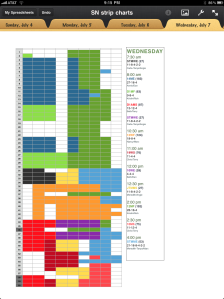 I’m vertical the instant my alarm goes off at 5:15. If I even think about the snooze button, I’m lost.

By the time I’ve showered and dressed, it seems like too much trouble to try to pick up some breakfast, so I head on down to catch the 6:00 am shuttle. I’ll just eat the cranberry-nut power bar I’ve been carrying around since I left home last Saturday. At least we’ve got the new shuttle route, which as of a couple of days ago, delivers and picks up from the loading dock entrance to B5, so we don’t have to make that long trek from the lobby down all the escalators.

Why so early this morning? We’ve got 27 Sr WE teams coming in to start fencing at 7:30 this morning. Originally scheduled for a different day, this event was moved to today (over BC objections) because of complaints that it was too close or too far away or on the wrong side of the individual WE event—I don’t even remember the specific reason anymore. In any case, this was the only time we could make it fit into the day, and if we can’t get the first few rounds done before the second wave of events comes in at 10:30, we will be in serious trouble.

We’ve all started cataloguing our cognitive deficits. I need to speak more slowly than usual—if I don’t, the words that come out of my mouth are not quite the words I’m trying to say, sometimes not even close. We’re being very careful going up and down the BC stage steps. More of us are muttering to ourselves the way Tanya and I were last night, attempting to be hyper-conscious of what we’re doing.

what happens when we slow down

Our relative down-times, like waiting for pools to come in once the 8:00 events are out, are almost the hardest to cope with. It’s better to wander the hall or do a Starbucks run than just sit. If we stop moving, we become aware of how tired we are, which is dangerous—if I just sit still, I realize that about 75% of my brain just wants to let my eyes fall shut so I can sleep. The other 25% is an emotional basket case—that section of my brain just wants to sit and sob. I can’t let that part leak out at all.

So why are yesterday and today so big and complicated? Why aren’t events spread out more evenly throughout the week? In fact, we could easily work up a schedule with evenly sized days—but most fencers and their families would scream bloody murder at such a schedule. To do it, we’d be picking events based solely on their size and weapon, to make sure we balanced the referees needed for each day. We wouldn’t be able to group the age-level events together, or the divs fairly close together. A family with a 12-year-old competitor wouldn’t be happy at all to have her Youth12 event on the first and her Youth 14 event on the next-to-last day, nor would a Veteran fencer much care to have his age level event and the Div 2 event he wanted to compete in separated by five or six days.

Creating a workable SN schedule is not a trivial exercise. We have a list of two or three dozen scheduling criteria, stating which events should be within a couple of days of each other, which should not be on the same day, which should occur before or after which others, and so on. Many of the criteria conflict with each other, and the entire list is long overdue for updating. For instance, we’re long past the days when we could balance the right-of-way weapons with epee—saber is no longer so small that its events can be squeezed into the corners left over between epee and foil events.

We often respond to complaints about the SN and NAC schedules by telling people to please let us know if they can come up with better ones. Many take this as snark, but we are completely sincere (possibly even desperate). We understand that we are probably falling into familiar patterns when we create schedules—a few fresh minds looking at the puzzle might well be able to come up with solutions we have missed.

A couple of weeks before SN, when we were preparing for the scheduling meeting for next season’s NACs, Tanya sent me some files from a self-professed spreadsheet geek who’d been looking at this year’s SN schedule in terms of “strip-minutes.” His calculations showed most of the days this week required 12,000-14,000 strip-minutes, with Tuesday at 16,678 and today at a daunting 20, 553. It’s a completely different and very interesting way of looking at things than we’re accustomed to and may well turn out to be useful for future scheduling.

For years, we’ve used a scheduling spreadsheet devised by George Masin for our planning. It tends to make us think in terms of event rounds—we fill in the number of competitors for each event, and it estimates round times and shows us how many strips we need in each weapon for each half hour through the day. We can adjust the times allowed for pool and DE bouts in each weapon (when the timings changed, for instance, we increased the foil times so that foil and epee now use the same bout durations), and we’ve used the program so much that we know where it tends to be off in its projections and by how much.

(If you’re interested in more detail about schedule planning, there was a recent thread on fencing.net—Nationals Schedule Posted—which discussed schedule making in some detail. In particular, you can find links to the scheduling criteria and event numbers in post #12 in that thread.)

Every few hours today, I do what I think of as a “consolidation” column in the strip chart on my iPad—I note exactly which rounds of which events are on which strips right now. By late afternoon, I’m wandering from one event tableau to the next, searching fruitlessly for strips I can steal for other events. Every strip has been in use for hours, and by 5:00, when the 12MF pool round should have been ending, I’m still looking for strips for seven of those pools, not to mention the 16 or 17 more strips we need for that infernally large ME team event.

Eventually, the earlier events finish, the boys’ foil pools finish, and by the time I have more strips to give to the ME teams, they’ve progressed far enough into their tableau that they no longer need them. Once again, we’ve made it through to the downhill slope and just have to let the final rounds fence out.

As it quiets down, I take a look at tomorrow’s schedule. Lo and behold, not only is the day smaller, but no event will need more strips for its DEs than it uses for its pools. It’s such a straightforward day that I can plan out the whole day’s strip usage without needing to wait to see how the middle hours go.

As I finish tomorrow’s strip plan, I realize my ankles hurt. I take a look and discover that I no longer have ankles—I have elephant stumps instead. I trudge over to the trainers and get a couple of ice bags, come back, sit down, and put my feet up, plopping the ice onto my ankles. All that obsessing over the strips we didn’t have all afternoon distracted me from drinking all the water I should have been drinking. Even though I’ve probably drunk at least three or four liters of water today, it’s not been enough. I realize I’ve been thirsty all day—a bad sign I know better than to ignore. Unfortunately, until just now, I didn’t even notice. The ice helps, though as usual it’s excruciating while it does its work.

I notice that Tanya isn’t scheduled to work tomorrow until 4:00, and shuffle over to where she’s sitting. “I’m thinking you should take the day off until your team event starts tomorrow. It’ll be your only chance for some time off before you take over as chair.”

“Funny you should mention that,” she says. “I was about to come over and tell you that I’m taking the morning off because it’ll be my only chance before I take over as chair.”

The other reason she’s taking the morning off is that when she started uploading today’s results to the website, she found herself trying to upload the same file two or three times, at which point she decided she’d reached her wall, and the results would just have to wait (much to the chagrin of many who’ve already forgotten that daily posting of results is a recent innovation and not a hallowed tradition).

Actually, Tanya wasn’t even supposed to be taking over as chair. But the person who was supposed to be chairing for the last five days of SN found out last Monday that she couldn’t get off work, so Tanya scheduled herself instead. At least she’ll get a few free hours tomorrow.

Once the epee teams finally finish, I have a little run-in with one of the medal teams, who are taking their own sweet time getting themselves to the awards area for their medals. “Hey, guys, we really need you to get over there. Grab what you need to wear and put it on while you’re walking over.”

“You have to understand,” one of them says, “we just lost a match.”

“You have to understand,” I reply, “most of the officials left in the building have been here since before 7:00 this morning and have to be back here in less than six hours.”

“Well,” says one, “you guys didn’t get around to starting this event until after 4:00 this afternoon.”

At that point, I just have to walk away. The only thing that saves them from a black card is that I can’t face doing the paperwork.

Leave a Reply to Momma B Cancel reply