(Finally getting around to writing up SN. Had a lovely time while my daughter was still home after SN, but once she left on Thursday, the typical SN exhaustion became apparent, and I spent most of Thursday and Friday dozing off at random times.—mg)

Christie flew in mid-day on Wednesday and we spent the afternoon on various errands (including finding her some comfortable shoes for refereeing and baking the three varieties of cookies I’d mixed up the day before).

We left home Thursday morning almost exactly when I’d wanted to and made good time up over the mountains. We were still in the midst of the uncharacteristically pleasant low- to mid-80s weather we’ve had most of the summer so far, and the drive was gorgeous, with patchy snow still on the ground over Donner Summit. So strange to have such an easy travel day to get to SN—Reno is an even easier—and far more scenic—drive from home than San Jose, but somehow being in my home time zone was oddly disorienting.

When we got to Reno, it was still too early to get into our room at the Atlantis, so we walked over to the convention center to see how setup was going. Most of the strips were already laid, but the scoring machines weren’t up yet—there was a constant long line of fencers getting their gear checked, and the armorers moved all their personnel into weapons inspection instead, which was a good thing. Anything to keep the inspection lines short on the first morning of competition, even if it means I have to come in early to get all the strip numbers up. 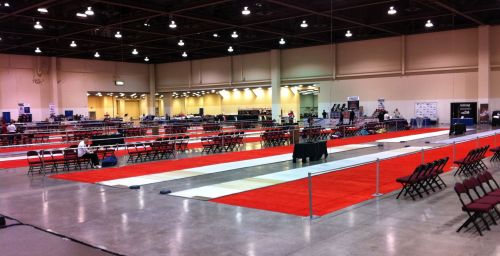 We had a few BC glitches: a phantom problem with the autofeed mechanism on the copier vanished completely both times the service guy showed up to fix it, so he cleaned it thoroughly and we’re hoping that will prevent any further problems. But the copier must be an older model than we’ve had recently—even though it looks just like our normal high-speed copier, it works at only half the speed we’re used to. (But at least it works.)

Somehow we’re down to only 3 or 4 reams of paper, so Marc went shopping for another couple of cartons and a few odds and ends, like push pins. The bulletin boards provided by the convention center are even more wobbly and decrepit than usual, potentially a problem with the limited aisle space we have here, quite a change from the vast acreage we had in Dallas this past winter.

The computer staff are wrestling with that weird corruption of the download again, too. It doesn’t happen every tournament, and they haven’t yet figured out exactly what causes it, but every so often the process of converting the Railstation data into the format that XSeed requires creates duplicate entries and sometimes combines separate entries with the same surname into one, among other weird glitches. Mostly it just requires hours of close work verifying the entries, though occasionally the computer crew has to crank up the one ancient laptop that still has Access 95 on it, so they can hack into the old Access code to fix things. How anyone can imagine that we want to keep working with the 18-year-old XSeed forever still mystifies me. (It’s entertaining, though, to see Dan McCormick’s surprise when one of the other computer staff shows him something that he doesn’t remember that XSeed can do—it’s been a long time since he wrote the original program.)

We leave the venue around 8:00 pm. Christie left hours earlier to move our stuff into our room and came back just as we were leaving. We decide to eat dinner at the Purple Parrot, so we’ll know where it is when we need to find it for breakfast in the morning. Sharon Everson joins us—she gives us the bad news about referee numbers: normally she hires around 140 referees for Summer Nationals. Last year we had only about 120; this year, begging and pleading and cajoling, she’s only managed to persuade 104 to come to Reno. The day schedule, of course, was created months ago based on normal referee numbers; the times assume most saber events, at least, will need to be flighted because of low referee numbers, but we could have problems with other events, too.