At least I slept well, unusual for the first night in a tournament hotel. Probably has to do with bringing my own pillow from home, a luxury not available when I fly in. That, and perhaps I’ve finally become fatalistic about what will happen and not stewing over what I can do to prevent disaster.

Breakfast is interesting. As usual on the first day of one of our tournaments, the restaurant is not prepared for the onslaught of officials and fencers. The computer crew tell me that at 5:30, there were only two servers on duty. By the time I get there, 15 minutes later, there are several middle-management types working taking orders, too. I always wonder whether the problem is that the hotel sales department never warns the restaurant management what to expect or whether the restaurant management discounts the estimated numbers we provide and fails to adjust their staffing accordingly.

It’s good that I got there early because of needing to finish putting up strip numbers. The BC staff and referees who got to the restaurant an hour later end up waiting half an hour or more for their food. The meals are something to behold, too: with our vouchers, we may order from six or eight menu items, all huge portions of egg/hash browns/breakfast meat/toast or belgian waffles or breakfast burrito or pancake sandwich. We can feel the cholesterol congealing in our arteries just looking at it all. Most of us eat barely half of what’s on our plates.

Over at the venue, I put the strip numbers up on the last few pods. The computer crew is still finishing up the initial seeding for today; once it’s copied and posted, it’s nearly 7:30. When I announce that the seeding is posted, with the warning to fencers to check that their information is correct, it’s as though the bulletin boards are suddenly magnetic, the way they appear to suck everyone toward them. Usually when I make that announcement, movement toward the bulletin boards is barely perceptible. 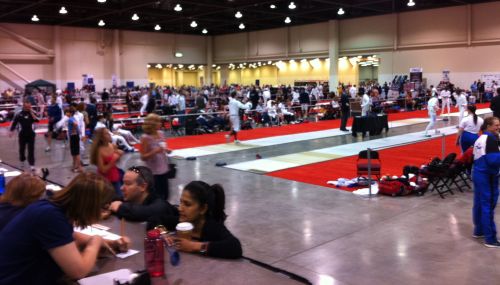 I’m a bit concerned about the BC staff we’ve got. For the first time in years, we’ve got trainees at SN, people who’ve only worked a single NAC before. They’ve got significant regional experience and did well at their first NACs, but we prefer to give trainees more national experience before we dump them into the chaos that is SN—we want to keep them volunteering for several years, after all, and not scare them off right away.

Fortunately, due to confusion about whether some BC staff would be used for the Zonal Championships, we’re staffed a little heavier than usual for many days. Instead of everyone working multiple events every day, most of us will have some days when we only work a single event, which will be a nice change from last year in Atlanta. And instead of only two of us as chair, there are three of us, so none of us will have more than four days as BC chair, also a big improvement over last year. But even hiring everyone who was available (and then some), coverage is thin on some days, especially on the computer side toward the end of the week.

When the referees finally wander in (a bit later than expected, between the slow restaurant service and the length of the first day morning meeting), it’s obvious that referee hiring was a problem, too. It looks to those of us who’ve worked a lot of national tournaments over the past few years that about half of the referees are completely new faces. After I got home, I asked Sharon for a list of SN referees, and it looks like only about 20 of them were complete strangers to me. But when you consider that many experienced referees don’t work all of SN—because they know better—the number of relatively inexperienced referees working each day is probably significantly higher than usual for SN. (And as it is, SN usually has a higher proportion of less experienced referees than do NACs, because of the number of youth and developmental events as opposed to team selection events being held.)

Fortunately, we’ve got an easy day to start with. It’s not an especially small day, with 602 entries, but it’s only four events, so it’s not a complicated day. It runs later than projected, of course, but by less than an hour, and we are, after all, in Reno, where there is food available however late we finish.