Today was a much more typical day off than Sunday was.

I was barely aware when Christie’s alarm went off, and the next time I woke up, it was nearly 10:00. I dozed a bit longer, and eventually got myself up and dressed, and read for a bit. I always intend to read more news during tournaments than I do, but it usually ends up seeming more trouble than it’s worth—my brain doesn’t parse sentences well after a few days in tournament mode, and I never mind not having any idea what’s going on in the real world. (I do manage to check the SF Giants scores every so often, though.)

Coincidentally (my days off are the last day of the first BC chair and the first day of the last BC chair), today is my birthday, and Lisa takes me out to lunch at 775 Gastropub, which has a truly excellent long beer list and yummy food. 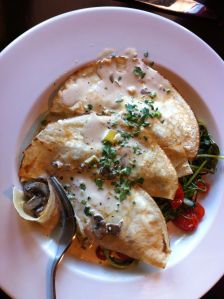 After lunch, we go into the shopping mall attached to the restaurant to walk off some of lunch (there was, after all, that brownie sundae for dessert). After an hour or so, I realize I’m getting sleepy, so I head back to the hotel for a nap. Off and on I wake up enough to read for a bit, but keep dozing off again.

At some point, Christie appears when she’s released from her day refereeing saber, and we decide to wait to have dinner with Angie and Kristin and Chris, once they’re done with their BC chores. We all walk across the street to Foley’s, which has become The Official Bar of Summer Nationals, for beer and pub food. Christie surprises me by paying for both of us before I get a chance to. “It’s your birthday, after all,” she says. I keep forgetting about that whole grown-up kid thing.