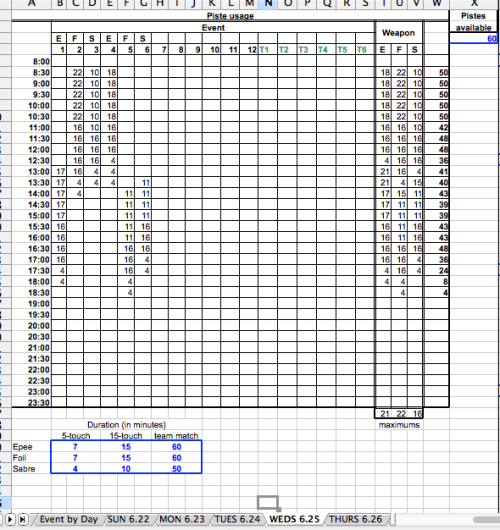 Actual:
Another relatively easy day of competition that kept mostly to the plan. There were enough saber referees to avoid flighting the MS, so that finished earlier than projected. (As the saber events get stronger over the next few days, this becomes less likely and most will almost certainly be flighted, because we will not have enough referees at the appropriate higher levels.) The last event, the WF, ended about half an hour later than the projection.

My knowledge of today’s events, though, is secondhand–today was my first day off. I’d turned off my alarms the night before, so when the hotel fire alarm went off sometime after 11:00 am, I was still asleep in bed. (It was confirmed as a false alarm quickly enough that I didn’t actually have to vacate the premises, at least.) I eventually got myself over to the venue to meet my daughter after her students’ event was done, and we had a great lunch over at North Market.

After that, I was getting sleepy again and headed back to the hotel for my afternoon nap. But I managed to remember that the Giants had a day game, so I turned on the local SF audio to listen, and Johnny Miller quickly put me to sleep. Every time he switched off with Dave Fleming, though, I woke up, which was perfect, because somehow most of the interesting parts of the game happened during Fleming’s innings. Of course, I had no trouble staying awake through the last three innings, no matter who was calling them–and because MLB was kind enough to extend its video “look-in,” I actually got to watch most of the 9th inning and all the uproar when Lincecum completed his no-hitter.

It was lovely of the Giants to time this one for my day off.