Fencing For The Edge 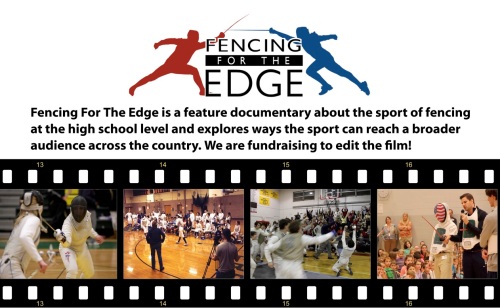 Just a quickie post today, because I’m submerged in getting my manuscript to the beta reader stage by Tax Day, but I wanted to pass along Holly Buechel’s IndieGoGo appeal for the editing stage of her fencing documentary. From her email:

Fencing For The Edge is a competitive sports documentary that follows four teams through the 2013-14 season in the New Jersey high school fencing league. Not many states have such a densely populated fencing area, so I wanted to show an exciting season with varying teams, compelling characters, and the life lessons you can learn in the sport. We have also followed Tim Morehouse’s Fencing In The Schools program from the first months of equipment development to it’s 8th state launch. We’ve filmed over 400 hours of footage across 10 states and are preparing to edit the film into a 90-minute feature length film. Editing can take many months and even years if only one person is working on it in their spare time. To reach our goal of releasing the film during the 2016 Olympics, we need additional support and funding for post-production.

A couple weeks ago, I launched my IndieGoGo fundraising campaign to raise money for the editing stage of the film. I have partnered with Women Make Movies, a 501(c)3 non-profit arts organization that promotes women film makers and stories. Through this partnership, the donations to our crowd-sourcing campaign are tax-deductible. We are also offering amazing perks that include downloads of the completed film, video messages from our US Fencing National Team members, and a screening ticket to the work-in-progress film at the 2015 Summer Nationals.

You can find her IndieGoGo campaign, which runs through April 9, here:

And just in case you’d like to pass the word along yourself, I’m passing her flyer along, too: