[WARNING: This post contains discussion of statistics by a non-statistician (last stats class I had was 44 years ago, a political science methods class I wasn’t much interested in even then). The numbers discussed are for entertainment purposes only and have not been analyzed for validity or reliability or any other measure of accuracy or usefulness. Not only that, while anyone is free to run amok playing with the potential implications or flaws in these numbers, I have no interest in doing so myself and will not participate in any discussion of them.]

Last week, while I was looking through old blog posts for something completely unrelated, I came across this Playing with Numbers post, which I’d forgotten about. It was a serendipitous find, since I’d been thinking about entry numbers since I saw the unexpected jump in entries for last month’s NAC in Richmond.

In that March 2011 post, I played with what I then called fencers-per-strip but is more accurately individual entries-per-strip (BC lives and dies by the number of entries, not by the number of fencers), and which I am now naming the Agony Indicator, after Hipmunk’s agony view, where you can see flight itineraries sorted by how awful the times and layovers are.

Back then, I looked at that season’s NACs to see whether the Agony Indicator correlated at all with what I called “perceived difficulty of tournament”—not the quality of the fencing but the difficulty of the schedule (flighted events, delays, strip & ref shortages, late nights). That year, as was often true with the event combinations then, the December and March NACs were significantly easier tournaments to run than the others, and October, November, and January (then mostly either Junior/Cadet or Junior/Division I combinations) were noticeably more difficult to fit into the available days. Here are the indicators I came up with for those NACs:

There appeared to be some correlation—the size of the indicator varied directly with the perceived difficulty of the tournament, and the more difficult tournaments had indicators above 40.

Since I had been looking at those Richmond numbers a couple of weeks ago, I wondered how recent tournaments fared with my Agony Indicator. With a bit of research (I still have most of my Masin spreadsheets from tournaments I’ve chaired over the past few years) and a calculator, I took a look:

Those line up in the same range, reasonably correlating with the challenges. (One caveat: some of these tournaments also had team events, which are not included in the Agony Indicator calculation.)

So what about this season? Just for fun, I ran the numbers for the Gutenberg SYC Alia and I ran last month, and it came out to a not-at-all-agonizing 20.759. That’s the only regional tournament I’ve calculated the Agony Indicator for, though, so I’ve no idea whether my indicator correlates across a range of smaller regional tournaments.

The Richmond NAC last month came out to 57.984, the highest I’ve yet seen, which seems to be in line with what I’ve heard about how things went—multiple flighted events and very late Saturday and Sunday nights. The NAC coming up this month in Kansas City looks to be slightly better, at 57.164, and that number should improve slightly with the no-shows there. Baltimore in December, using the entry numbers as of last week, is in between at 52.776.

What about Summer Nationals? The Agony Indicator for SN calculates out to a completely different range, since the numbers are often three times those of a typical NAC, with only half again as many strips. The 2010 SN in Atlanta was 108.84. The more recent SNs worked out like this:

What’s the takeaway? If you happen to come upon entry numbers and the number of strips planned before an event, you can calculate the entry/strip ratio for yourself. If the Agony Indicator works out to more than 40 for a NAC or for SN, more than, say, 105, you can expect multiple flighted events and late nights.

Got any spurious statistics of your own?

[This is my last post about (nonfiction) fencing for the foreseeable future, though I will blog on other topics occasionally while I work on finally finishing what I hope will be a publishable draft of my SN murder mystery.]

I didn’t even try to blog Summer Nationals this year.

There were a couple of reasons for that. The less important—but completely unexpected—one was that driving home from San Jose, when I swerved to avoid a zigzagger on I-680 in Concord, I ended up off the side of the road with my car totaled, and spent the next several weeks in too-frequent discussions with my insurance company over the settlement. (I’m still amazed that I had the good instinct not to hit my brakes in the heavy, high-speed traffic, that my airbags didn’t deploy, and even more, that I had not so much as an achy muscle from the collision.)

The more important reason I didn’t write about this year’s SN is that I was so completely done with big tournaments. Despite the somewhat reduced number of entries from the huge 2014 SN (essentially a return to the previous year’s numbers, which were not exactly small) and a relatively decent least-horrible schedule, it was all I could do to make it through my 8 days on the bout committee. I spent most of my days in a barely suppressed rage, too focused on not losing my temper at some poor innocent who had nothing whatsoever to do with my long-simmering frustration over problems that could have been fixed years ago but have not been. Essentially, I confirmed my suspicion that I needed some serious time away from USA Fencing.

When Brandon sent out this season’s request for BC availability, I told him I would be willing to serve as a last-minute replacement in case of an emergency cancellation, but that otherwise I was not available at all for national tournaments this season.

So far, I’ve not regretted that decision at all.

I’ve popped in to a couple of local Bay Cup tournaments, just to watch the fencing and see friends. That, at least, has not been spoiled by my national-level disgruntlement.

But I also wanted to test whether my BC-crabbiness was limited to national events or extended to running regional events as well, so I was happy to say yes to Rochester Fencing’s request to come help run their Ben Gutenberg SYC a couple of weekends ago. (Of course, there was extra incentive to say yes—my younger daughter is a saber coach at Rochester FC, and I could stay over a few extra days for a visit.)

Not just a smooshy floor, but natural light made the SUNY Brockport SERC a preternaturally pleasant venue.

The Gutenberg turned out to be the single best regional fencing tournament I’ve ever been involved with, starting from the moment I first stepped into the venue (SUNY Brockport’s gorgeous SERC) for setup on Friday morning. Until I walked through that entry and stepped onto the sport floor, I had not realized how inured I was to bare concrete floors. And the novelty never went away for me through the end of the last event on Sunday—every time I walked into the venue, my feet were surprised. It wasn’t just the floor surface, either—this was the least concrete-boxish venue I’ve ever seen.

The tournament ran really well, too—events ran on time, we always had enough referees, and Alia (my BC co-chair) and I trained a raft of great parent volunteers on Fencing Time and tournament operations. It’s just too bad that Rochester is such a remote location—the RFC could put together a great local organizing committee for a NAC or SN.

And what about my little test? Right this minute, with one small caveat, I wouldn’t mind if I never ran another fencing tournament again at all. My caveat? It’s still really fun to talk with fencers as they bring their DE slips to the BC. If I could do that every so often without having to do anything else—no BC management, no hearing about fencing politics, no complaining from coaches or parents, no insane entry numbers or strip and referee shortages—I might one day come back to working tournaments.

My extra three days in town were a lot of fun. Aside from the Monday, when I worried about how much more tired than usual I was, until I realized that I normally spend most of the day after a big tournament asleep on a plane, we mostly just took it easy, eating good food, seeing a bit of Rochester and specifically, the new club RFC is moving to. I got to watch a few of Christie’s classes and lessons. (I knew she was good, but it was amazing to see how much better she’s become since the last time I saw her teaching.)

And Christie took me to a great brunch at the Highland Park Diner: 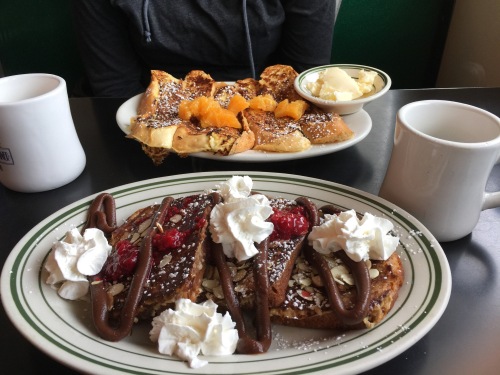