We Get the Job Done 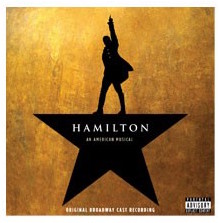 I’m obsessed—for entirely opposite reasons—with this year’s memorably insane presidential campaigns and with Hamilton: An American Musical (or more precisely, with the soundtrack, since both the commute and the ticket prices are well out of my range at the moment). But a peculiar synergy between the two sent me digging into the family history and genealogy files that I’d essentially ignored since I took possession of them after my dad died.

You see, I’m a product of white American suburbia. Not only that, I was born in the ’50s into a family that looked like every family you could see on TV back then. Just like in Father Knows Best, we lived in a house with a lawn front and back, and were a father with a job, a mother who took care of us, and three kids—me and my younger brother and sister. Oh, and most of the time, at least one dog. We ate hamburgers and meat loaf and hot dogs and Kraft dinner (sometimes with ground beef mixed in) and scalloped potatoes, with sides from the official rotation of suburban American vegetables (green beans, corn, peas, and carrots, with rare additions of asparagus or artichokes when in season). For exotica, there were occasionally ground beef tacos with faux guacamole (without chillies or tomatoes or tomatillos but with lemon juice and mayonnaise—shudder).

I’d been aware that my ancestry was mostly Scots-Irish and German, that one grandmother had come from England as a child, and a great-uncle many times removed had signed the Declaration of Independence, but that was about it. I’d never bothered to dig deeper. It was bound to be pretty dull, right?

Turns out, not so much.

Dad had pulled together information from various cousins who’d been interested in genealogy and added more from various online databases and more correspondence with distant relatives. Among my various boring ancestors were:

Dad documented American ancestors back to the mid-1600s, to English and Irish who came to Virginia. But in that generation, which would include 4096 ancestors for me, he only found four individuals. For well over half the ancestral lines, the information just stops, usually because female surnames are unknown or the individuals had migrated to parts of the continent that maintained few vital records at the time. Maybe someday I’ll try to follow up on some of those missing people.

What I did recently, though, was make a diagram (below) from those ancestral charts, noting which ancestors were immigrants (green dots), which were born here (black dots), and where the trails stop (red dots). What jumped out at me almost immediately was that those green dots show up at least every two or three generations. I’d be willing to bet that beyond the red dots are at least as many immigrants as there are among my known ancestors.

What you can’t see from this diagram, either, is that even that longest-documented line, the one that goes all the way back through colonial Virginia to England and Ireland, is full of people who didn’t stay where they were born, who moved hundreds of miles to explore unfamiliar places and build new communities. Or that some of those ancestors in both Virginia and even New York, far enough back, were slaveowners, so that it’s likely, given the reality of slave-based economies, that I’ve got more than a few undocumented and less white distant cousins I will never know.

Which brings us back to that synergy I mentioned at the beginning of this post. I am who I am because of not just where and when I grew up, but where and when all those ancestors grew up and lived, where they came from and what they built and moved on from and rebuilt. And that’s true of all of us. Whether our immigrant ancestors came for adventure, for a better life, for simple refuge, or because they were brought here unwillingly, we Americans are who we are because of them. Because of all those generations of immigrants who’ve never stopped coming, who’ve never stopped making us stronger, who even now make us more than we were.