(Caution: Some photos in this post look graphic, though they are all simulations. None of the blood and gore is real.)

I hadn’t planned on going to WPA again this year. After last year in Appleton, I decided I needed to finish my work-in-progress before I went to any more workshops or conferences. But then my local Sisters-in-Crime chapter, Capitol Crimes, held a raffle in June for a WPA registration, courtesy of its founder and organizer, Lee Lofland, who is also a member. Naturally enough, when to my surprise I won, I decided that the world was telling me I needed to go to Wisconsin this summer.

With my June registration (WPA sign-ups opened in March), I was too late for any of the prior-registration-required workshops, like the hands-on driving and shooting sessions, but there was still plenty to attract my attention. My manuscript is not a police procedural, but it does contain a murder (or two), so I still want to get the law enforcement parts right. And for the next books, I’ll need a bit of fire and EMS information, so WPA had plenty for me in the formal sessions held at Northeast Wisconsin Technical College (NWTC), and unlike last year, I managed to keep my lecture sessions to the mornings and hands-on sessions for the afternoons, so I entirely avoided that after-lunch sleepiness.

Hollie and Nathan turned out to be the ringleaders of what WPA fondly refers to as “announcements,” held each morning before the workshop sessions begin. On Friday morning, we got off our buses from the hotel to see a (Hollie-coordinated, we learned later) head-on collision scene, which eventually included multiple victim actors (including the corpse on the hood, who most of us assumed was a mannikin until his foot eventually twitched), two ambulances, a fire truck, DWI testing, and a life-flight helicopter. And once it was all over—in about 35 minutes, though it felt more like an hour and a half—everybody came back to answer questions about what they were doing and why. 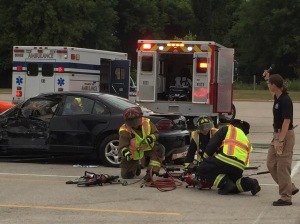 For the Saturday morning announcements, we all traipsed into a lovely semicircular lecture hall (the NWTC facilities were uniformly impressive) for what looked to be a lecture with slides from Nathan on EMS procedure and turned out to be an active-knifer scenario. (He said later they’d originally thought to do an active-shooter simulation, but decided that was too risky with concealed carry being legal in Wisconsin.) His slide presentation was interrupted by shouting and then a man who’d been stabbed in the chest came through the door. Nathan started emergency care and then recruited volunteers and coordinated care for the additional victims as they came in through other doors as the attacker moved through the building. Then came the police, who held us at gunpoint with our hands interlaced on top of our heads until they could clear the room and ensure that the attacker was not among us (or the medical caregivers). Even knowing this was a training simulation, there was an amazing amount of adrenalin at work in that hall. And of course, once Nathan ended the scenario, everybody lined up to show their equipment and take questions. 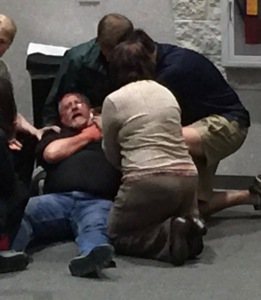 The Sunday morning panel (“announcement”-free, which is probably a good thing, given how much info we’d already been trying to absorb) was, as was the case last year, another highlight, and a great way to top off the weekend. All of the available workshop presenters and speakers participate, both to answer questions (though unlike last year, the first question wasn’t “I need to blow up a lakeside cabin remotely, so what kind of explosive should I use?”) and reflect generally on the experience. The fabulous Colleen Belongea (a huge hit at last year’s WPA, when she was a full-time Green Bay police officer and part-time instructor, she’s now a full-time NWTC instructor) told us how much she enjoys WPA because of the difficult questions we writers always ask. “You ask questions that make me think. It’s changed the way I teach, the questions I now ask recruits, to make them think.” 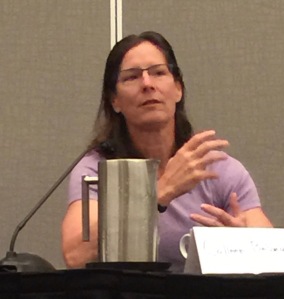 And for those of you who share my reluctant fascination with the carpet patterns used in public spaces, Green Bay was full of them: