I’ve written several times before about how I got into working bout committee at USA Fencing national tournaments, about how annoying it was for both me and my daughters for me to be right there at the strip watching them compete. For them, I was a distraction; for me, watching them fence was uncomfortably stomach-churning—there was nothing I could do to help them except refill their water bottles and try not to bother them. When someone suggested that I help out with bout committee (BC), I jumped at the opportunity—it gave me something useful to do far enough away from my daughters’ strips to eliminate the stomach-churning, but still gave me access to plenty of information on how they were doing.

This is me having fun.

Next thing I knew, I was working more tournaments than the girls were competing in. Within a couple of years, I wasn’t just helping with data entry—I was running competitions and then entire tournaments, assigning strips and BC staff, and dealing with questions and problems from fencers, coaches, parents, referees, and spectators. I discovered that I love running huge fencing tournaments—the bigger, the better. I love the combination of detailed and big-picture focus required to chair a tournament. I love watching the interpersonal dynamics: fencers & referees, fencers & parents, parents & officials, coaches & officials, officials & officials. I love watching fencers work their way through an elimination tableau, managing their intensity and stamina to keep winning all the way to the gold. I love watching fencers cope with disappointment and frustration to keep coming back and trying again.

I’ve never been one for resort-type vacations, the kind where you sit on the beach and relax in the sun. Masochist I may be, but give me the 15-hour days within concrete walls, listening to the whines of scoring boxes and the screams of Cadet saber girls. Give me the parents who haven’t yet learned that it’s their kids who are fencing and not them. Give me the coaches who believe I’ve deliberately assigned their fencers as far from each other as possible within the venue. Give me the referees who never seem to learn that they should eat lunch when they’re told they should eat or they may never get another chance. Give me the generically awful concession food, the kids who roll their eyes at their overprotective parents, and the cranky and charming veterans. Give me the fencers tickled out of their minds to have won their first DE and those for whom winning gold medals has become almost routine. Give me the ten days of chaos and  7,000+ entries that is Summer Nationals and let me play. 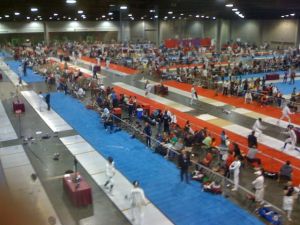 the bigger, the better

So why am I ready to walk away from fencing?

One of the first—and most important—concepts we teach new BC trainees is “You will make mistakes.” Everyone involved in fencing learns this: fencers choose wrong actions, referees blow calls, BC staff mis-transcribe scores or names. What is crucial is what happens next—do we learn from our mistakes to prevent them from happening again? On the BC stage, that means we figure out how the error happened, and do what it takes to minimize the chances that it will happen again—refocus attention, improve staff training, alter our procedures, and if it comes to that, change personnel. Our mistakes, if they are unavoidable, should be brand new mistakes we’ve never made before. 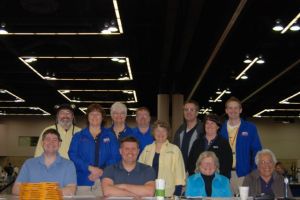 For several reasons, we are not learning: the United States Fencing Association is making the same mistakes it’s made for the past two Olympic quadrennials. A couple of weeks ago (courtesy of Michael Quinion’s World Wide Words), I came across the perfect word to describe USFA’s current straits: “omnishambles.” Apparently gleefully in vogue to describe British politics, it is a combination of tragedy and farce in politics, encapsulating “serial misjudgments and misadventures.”

• USFA members often receive incorrect information from national office staff who neither know nor consult the appropriate rules and policies before answering questions from members. Avoidable errors in the processing and updating of tournament entries have caused event delays of 10–30 minutes at every national tournament this season. Confusion and misunderstandings about travel and hotel arrangements for officials have also been common. As noted in the draft USOC audit report (and not specifically addressed in the executive director’s April 26 report to the board), 24 individuals have left positions in the national office since 2008; the staff of the international department alone has turned over completely twice in the past two years. Such rapid turnover certainly helps to explain the staff confusion about fencing policies and procedures, but what explains this number of departures from a staff of only 13 or 14 individuals?

• Others can speak more authoritatively about USFA finances, but I cannot help but wonder at the sloppy controls noted in the USOC audit report draft: after the USFA financial debacle of 2008, how is it that our accounting procedures are anything less than squeaky clean?

(And while we’re on the topic, I can imagine an executive director who, on receipt of a USOC audit report draft, might share it with the full board, explaining what it says, where he thinks it’s wrong, and what revisions he’ll recommend to the USOC for the final version. But that’s not the ED we have. And I can imagine a board less concerned with the “premature distribution” of a document marked neither “confidential” nor “not for public distribution,” and more concerned with the substance of its content and the frustration that led to its public release. But that’s not the board we have.)

• The bulk of the work developing USFA policies is done—in theory—by various committees appointed by the board. In practice, the four “standing committees of the board,” six “additional principal committees,” six more “committees of the board,” and four “task forces” comprise an ungainly, labyrinthine governance structure, suffering from murky delineations of responsibility, diffused authority, difficult communications, and a notable lack of direction.

Consider one relatively simple example: determination of the national tournament calendar. Let’s see—that’s to do with domestic national tournaments, so obviously that should be determined by the Tournament Committee (an “additional principal committee”). But wait, there are other interested groups, too: the National Team Oversight Committee is concerned on behalf of the high performance director, the national coaches, and the elite programs; the Athlete Council has an interest, obviously; other groups (the ROC Committee, the Youth Development Committee, the Veterans Committee) have regional calendars dependent on and potentially affected by the national calendar. Now, of course, we have the recently created Tournament Oversight Committee, composed mainly of the chairs of most of these other committees, to help coordinate matters.

So whose job is it to take the lead on creating a future season’s calendar? The TC could start, but would end up needing to get input from the NTOC. How do we do that? We committee chairs don’t get a directory with emails and phone numbers for all these committee chairs, so we’ve got to start with tracking down contact information. If our calls don’t get returned or emails answered, we might decide to talk with the appropriate people at the next NAC (if we happen to see them and if they’re not in the middle of fencing or coaching or refereeing or running an event). Or maybe we have a nice chat, and the chair promises to consult with her committee and get back within the next couple of weeks. Or maybe it’s the TOC’s job to coordinate proposals? Who’s in charge here?

The next thing you know, it’s already April and everybody’s in panic mode because there’s no calendar yet for next season, and it needs to be decided right now so it can be posted to the website within the next couple of days, and suddenly there’s a proposal floating around which the committees only just found out existed, and oops, I guess we’ve got to go with this one because we don’t have the time any longer to consider all the ramifications more thoroughly, so whatever the problems with it, this is what we’re stuck with for next year. (But we’ll fix it for the season after next—we’ve got plenty of time to start thinking about it now.)

Last August, I was cautiously optimistic that we could break this pattern when I was among a group—tournament-related committee chairs, as well as a few board members and national office staff—invited to come to a weekend-long “Tournament Summit” in Colorado Springs to work out a competition plan for the coming Olympic quadrennial. Then I saw the agenda—we were to start by identifying problems; developing solutions was not on the schedule. During a morning break on the first day, one of the board members mentioned that he’d been to a similar meeting four years earlier. “Nothing happened after that one, either,” he said. At the end of our weekend, the executive director gave a nice pep talk about what a good start we’d made and promised that he would send out the notes from our discussions to us within the week. He has yet to do so.

• Finally, there is our board of directors, which utterly baffles me. I’ve worked with most of these individuals at tournaments for years; I consider many of them friends. Individually, they are energetic and accomplished people—coaches, club owners, athletes, successful professionals in non-fencing businesses. As a governing entity, though, the board meanders unpredictably between ridiculously detailed micromanagement (such as 45 minutes in February spent discussing whether the automatic award of classifications to members of national championship teams should be discontinued) and unwillingness to exercise appropriate oversight of USFA operations (as in “we cannot micromanage office personnel”).

Watching board meetings is painful. Some parts are routine: approving the minutes, accepting committee reports, complaining about financial reports getting to the board too late to allow for thorough review before the meeting, hearing the executive director say, “I don’t know; I’ll have to look into that and get back to you,” especially disconcerting in regard to budget line items.

The Strategic Plan is much admired—by the board, at least. But without effective leadership and mechanisms for achieving its goals and objectives, it’s just a wish list, a long, comprehensive, intimidating wish list. Every so often I look at this part, relevant to my work on the TC:

• Objective 1: By April 1, 2012, have an approved plan for tournaments at all levels for the 2012-2016 quad. Proposed schedule to accomplish this objective:

Ambitious and worthy objectives. They sound a lot like what the TC was originally meant to do, and quite a bit like what that Tournament Summit last August was intended to work on. I’m even a bit sad that the TOTF isn’t on the current task force list—it would have made a nice addition to the committee alphabet soup, fitting in well with the TC, the NTOC, and the TOC. That strategic tournament plan for the new quad might well have been a good thing to have done, too.

Our whole governance structure seems to be best at creating committees and making lists, but we’re not good at all with the follow-through, with the accountability. What we’re missing is leadership.

And that missing leadership is why I’m going to need a lot of persuasion to vote for any incumbents at all in this year’s USFA board elections. I’ve worked through the established channels. I’ve talked with national office staff and management and with elected board members about the problems that plague us, and I’ve seen no improvement. Going public is the one option I’ve not yet tried.

I wish I could say that I am alone in my frustration, but I am not. It is not my place, however, to speak for the other volunteers who’ve reached the same point I have, where we’re ready to walk away from the tournaments and the sport we love. They must speak for themselves. 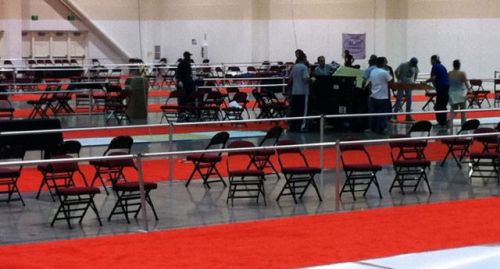 Elvis has left the building.