If It’s February, This Must Be Dallas Again

There are definite advantages to running tournaments in the same city two months in a row: By the second month, we know where the hotel is, that we want a Red or Blue train (and NOT a Green) to get to the venue, that restaurants in the West End stay open late enough for officials to get real dinners—as long as we don’t try to go back to the hotel to drop off our laptops and change clothes first—and that the local beer of choice is Shiner Bock (though the Shiner Seasonal was excellent, too).

But there’s one big drawback: The instant I stepped through the door into the hotel, I felt as though I’d never left. Not a good thing—as a general rule, you don’t want the day before a national tournament to feel like the fifth day, normally well past the stage where BC staff mutter to themselves constantly to talk their way through chores that only three days earlier were effortless.

The Junior Olympics, though, are a relatively easy tournament to run. Entry numbers are high, but the number of events is small, and even with the addition of Junior team events, the schedule is not complicated. For JOs, too, we had a better layout than for NAC C last month—no Tienanmen Square and no columns blocking sight lines from the BC stage—and not least for me, I wasn’t BC Chair this time.

On Saturday, we had a visit from one Mr. Bernardini of the FIE, who came to look at how we run our tournaments. An Italian native, he had little English, so Peter Burchard, one of our head referees (with little Italian), provided French translation for the conversation between Mr. Bernardini and Dan McCormick, who wrote the XSeed tournament software we currently use and worked computer for this JOs.

Mr. Bernardini, it turns out, was impressed with both our software and the size of our tournaments, especially that we run more than two events at the same time with as many entries as we have. Later that evening, at the board meeting, he expanded on the topic a bit, describing the day’s events as running “like a Swiss watch” and complimented our tournament operations. (I hope one day he is able to visit us for a Summer Nationals, just to get an idea of the scale of events we handle.) Nancy (whose French is fluent) talked with him directly, and said he also commented on how polite both our fencers and our coaches were.

My relatively easy schedule this time allowed me time—though not enough—to start talking with people about the Tournament Committee’s current proposal for revising the NAC circuit. Our proposal was included in the board’s agenda packet (pp. 7–10) for this meeting but was not discussed at the board meeting. I’m hoping for lots of comments to the “tc@usfencing.org” email address by the April 1 deadline.

Monday night was one of the better last-night dinners we’ve had in a while—there were 11 of us, both BC and Sports Medicine staff. One of the highlights was discovering that neither Molly, the trainer trainee, nor Carla had ever played Angry Birds. We fixed that. 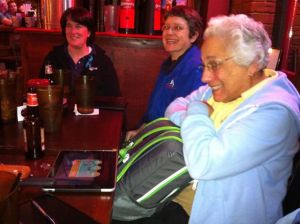 Carla, bemused at clearing a level in Angry Birds.

The other day while cruising online, I stopped dead at a quote from a Harvard researcher named Charles Czeisler:

“We now know,” says Czeisler, “that 24 hours without sleep or a week of sleeping four or five hours a night induces an impairment equivalent to a blood alcohol level of 0.1%.”

The article, “Too Little Sleep: The New Performance Killer,” about the effects of sleep deprivation, prompted flashbacks to last summer and a bit I wrote in July about Summer Nationals in Atlanta:

We’ve all started cataloguing our cognitive deficits. I need to speak more slowly than usual—if I don’t, the words that come out of my mouth are not quite the words I’m trying to say, sometimes not even close. We’re being very careful going up and down the BC stage steps. More of us are muttering to ourselves the way Tanya and I were last night, attempting to be hyper-conscious of what we’re doing.

Our relative down-times, like waiting for pools to come in once the 8:00 events are out, are almost the hardest to cope with. It’s better to wander the hall or do a Starbucks run than just sit. If we stop moving, we become aware of how tired we are, which is dangerous—if I just sit still, I realize that about 75% of my brain just wants to let my eyes fall shut so I can sleep.

According to this article, sleep deprivation affects higher-order reasoning first, and energy that would otherwise be devoted to solving problems is instead used just to stay awake.

Makes me wonder what improvements in the quality of national tournaments we could make if our bout committees and armorers and referees weren’t constantly teetering on the edge of exhaustion, if we were functioning at the equivalent of, say, only half the legal DUI limit.